At Joseph Decuis, the fine dining restaurant, we offer a delicious charcuterie board that highlights the amazing Wagyu we raise on our farm.  But we also raise pork, specifically Mangalitsa, and from this we now have some incredible prosciutto that is so delicious we put it on our December appetizer menu as an item by itself.  We also have a limited number of whole proscuittos that you could proudly serve for a holiday party or give as an extraordinary gift. 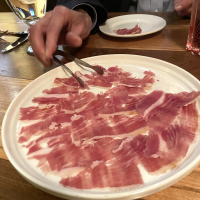 Mangalitsa.  This breed of pig is not commonly known in the U.S. but has internationally been garnering an incredible reputation.  It has become known as the “Wagyu of pork” because it is so incredibly marbled and flavorful.  Known as the "royal pig," it was originally raised for the royal family Habsburg some 200 years ago in Hungary.  Unfortunately, the Mangalitsa population was decimated during World War I and then again with World War II following.  After the fall of the Berlin Wall, there became a renewed interest in this breed from those who remembered it and missed it.  Live Mangalitsas were imported into the U.S. in 2007 and since then there has been a concerted effort to resurrect the breed and reintroduce it to the world.

Milo & Anya, the boar and sow on our farm, have enchanted visitors for years.  Big and wooly, they make quite an impression when they jump up on their hind feet and rest on the wall of the stall to inspect the interlopers to "their" barn.  Mangalitsas are not your pretty, pink, smooth-skinned Wilburs but are a scruffy tough looking pig that sport beige wooly hair resembling sheep’s wool.  In fact, visitors to the farm often ask if they are part pig and part sheep. The answer to that is resounding no.  They are all pig! 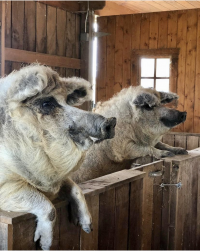 Prosciutto, the Italian translation for ham, originated in Italy thousands of years ago as a necessary way to preserve meat before refrigeration. Made from the hind leg of a pig, it is seasoned, salt cured and air-dried, but not smoked as a ham in the States would be.

Our prosciutto is made from our farm raised Mangalitsa harvested after 18 months of age that were then cured for over 13 months.  Creating prosciutto is a lesson in patience, waiting to see the results of this specially cured remarkable meat.  We are thrilled with the results - rich, tender, and flavorful – and know you will love it too.

Come enjoy our prosciutto as an appetizer or if you are interested, a limited number of whole prosciuttos are available for sale through our Emporium.  Please ask! 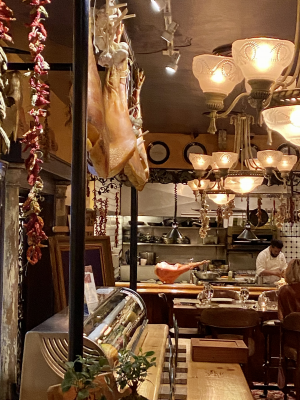