February is the traditional start of summer here at Joseph Decuis Farm. Usually this involves shoveling snow to access our greenhouse, but no matter what the weather is like, summer begins here in February; that’s when seeding for our summer crops begins in earnest. This past week we have been busy seeding onions, and next week we will move to summer staples such as tomatoes and peppers. It’s a good time to appreciate the seed’s role in farming.

Over 80 percent of all spinach produced in the United States comes for just six counties. This means that most commercially available spinach seed is bred to withstand the conditions of these six counties, not those of the other 3,138 other counties (and county equivalents) in the U.S. Spinach is just one example; the statistics are similar for nearly every fruit and vegetable.

Since farms in the large vegetable-producing regions generally only focus on a handful of crops, certain problems have intensified. Pests and diseases have a long history of destroying monocultures (i.e. the potato famine, the banana extinction), and their presence has forced farmers into a type of arms race to protect their uniform crop. For example, every few years vegetable breeders rush to develop a variety of spinach that is resistant to a new strain of Downy mildew, a fungal pathogen capable of destroying entire crops. Without complete resistance, spinach and many other crops cannot be grown in the region.

Ultimately, farming only a few specific strains of crops has led to less diversity in the global seed supply, threatening our food security. This can be prevented with genetics adapted to every county, not just a few.

Local food depends on local seed. Spinach grown in Indiana during January weathers a vastly different climate than spinach growing in California. Therefore, we buy seeds from regions where spinach has been bred to withstand a cold, dark winter. Since Indiana doesn’t have the same diseases that California faces, we also have access to a wider variety of vegetables.

Thankfully, the local organic movement has created a demand for vegetable breeders to resurrect some forgotten varieties. Heirloom tomatoes don’t ship well, which is why most commercial tomatoes are colorless and tasteless. Purple carrots take longer to grow and are less uniform, which is why orange carrots became popular. Time and again breeding decisions were driven by monocropping systems in a handful of regions, sacrificing flavor and diversity.

Do you want to save your favorite tomato? Do you fancy purple carrots? If so, eat them! Here at Joseph Decuis we grow over 150 varieties of fruits, vegetables, herbs, and flowers that add flavor and color to every meal. We look to bring something new to the table and to change the relationship Hoosiers have with vegetables. Along with serving our customers, we are also helping to protect our fragile food system.

All of that starts with a tiny seed. 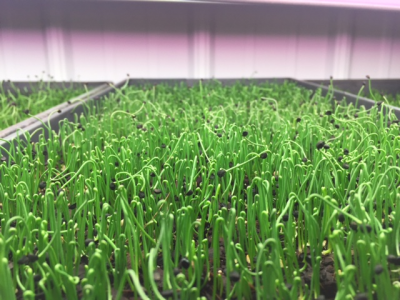